Skip to content
In Jeopardy for Life: The Plight of Religious Minority Women and Girls in Pakistan
November 30, 2022
| By Elaine Alam

Women and girls too often live challenging lives. In some cases, religion can help enhance and enrich their lives. In other cases, religion adds another layer of complexity and danger to their agency: they are considered acceptable targets of violence and other forms of abuse, with religion used to justify these violations.  Schoolgirls being kidnapped in Nigeria are one example of the violations women and girls, especially those from minority religious communities, face worldwide.

The egregious situation of many women and girls in Pakistan is another example.  However, the escalating numbers and kinds of persecution they face are not getting the attention they deserve.  Minority religious women and girls, particularly from the Christian, Hindu, and Sikh faiths, are targeted for abduction, forced conversion to Islam, rape, and forced marriage.

The Pakistani criminal justice system exacerbates these violations by usually turning a blind eye to them, treating such cases with impunity.   While these violations should lead to criminal investigations and legal proceedings, in fact, the ‘social onus’ increasingly is on the minority girl’s family and community to prove that she did not just run away due to, for example, her family’s economic circumstances. The family has to prove that their child, for example, was abducted and then forced to convert. Given that the system usually is on the side of the perpetrator, the wrongdoer often only has to produce a document, usually bogus, to legitimate the abduction and conversion.  And the families, in most cases, do not have the resources to contest these violations.

In October 2021, a parliamentary committee rejected a bill that would protect minorities against forced conversion that Pakistan’s Ministry of Religious Affairs also opposed. Opponents argued that setting an age limit for conversions by non-Muslims “goes against Islam and the Constitution of Pakistan.”  An effort supported by civil society groups to amend the Child Marriage Restraint Act to raise the legal age of marriage for girls to 18 years from 16 years stalled in 2019. Yet, unconfirmed reports estimate that as many as 1,000 girls and young women may be forcibly converted annually, primarily from Pakistan’s Hindu community.

We cannot remain silent given these violations and their consequences. While many, especially internationally, have spoken out against Pakistan’s blasphemy laws—and must continue to do so, a more silent persecution in the form of forced abductions and conversions also needs to be as aggressively and passionately called out and addressed.  Challenges include the difficulty in proving forced conversions in the absence of a specific law, and the acceptance in judicial proceedings of, for example, forged birth documents that falsely prove a girl is not a minor and eloped.

Much needs to be done.  What can we do to advocate for the rights of minority women and girls?  We can work in support of measures to combat forced conversions, including better birth records and access to justice in rural areas—including sensitizing police and lawyers, raising the legal age for marriage to 18, and taking the process out of the hands of Islamic clerics.

We also must provide protection and safeguards within and outside of religious minority communities when a forced conversion is challenged. The threat to the lives of women and girls given their marginalization is daunting. We also need to be aware of, and take account of, the lingering danger to the entire village and community, including mob violence, where the incident took place. It is therefore imperative to create local safe spaces and support for victims and their families.

These efforts cannot be short-term.  We cannot ignore the long-term impacts on the health and wellbeing of these families and communities. Psycho-social support is crucial to help individuals, families and communities deal with the consequences of the trauma, coercion, threats and a constant sense of fear they endure. While legal support is key to helping persecuted families, so is psycho-social support, as are women girl’s access to an education and their ability to be economically independent.

Exclusion and violence are two of the most demoralizing experiences a person can face. Yet, many religious minority women and girls in Pakistan live their lives in exclusion and amidst violence. We must support their agency and voice as well as their communities. We have no choice.

Elaine Alam is a freedom of religion and belief advocate, activist, human rights defender and international development practitioner with a strong focus on South Asia and the Horn of Africa. 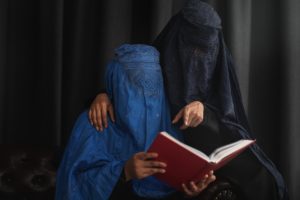